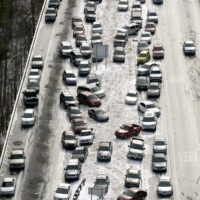 Yesterday, Atlanta was hit with a snowstorm that rivaled the ‘snowmageddon’ that happened in 2011. Cars were stranded, buses fell off the road into ditches, and ten minute commutes expanded into 3 hour commutes. There were reports of people taking upwards of six hours to get home.

It started snowing early in the day and began to pile up.  By the time that businesses called it an early day and sent people home, it was too late to save them from traffic snarls that lasted for hours. Schools tried to let out their students around the same time, further compounding the traffic issues.

The snow didn’t let up until the early evening, leaving at least three inches on the ground.  While this may be child’s play to Northern cities, Atlanta does not have the infrastructure to handle snow and ice well. As a result, over a thousand calls to police were made last night alone for traffic accidents. Police, fire, and rescue personnel were dispatched to the most severe of crashes.

In response to all of the stranded motorists, the people of Atlanta started to create impromptu shelters.  Churches, Mexican restaurants, Home Depots, and other places raised their hands and said ‘let me help’ to the community, pouring out whatever they could offer.

It is great to see people helping each other during the snowstorm, but soon enough people will need to deal with the aftermath. Will insurance cover damage to their vehicles, or the injuries of the unfortunate people who got hurt during this storm? Let the law offices of Stokes & Kopitsky fight for you. We have years of experience with insurance negotiations and fighting for the injured. Call today for a free consultation.